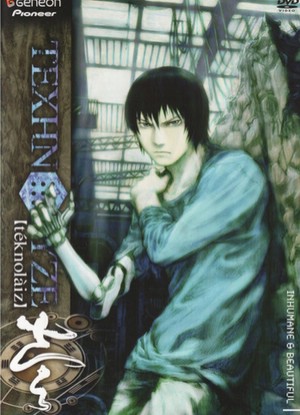 Summary: In a man-made underground society, descendants of a banished generation vie for control of the crumbling city of Lux. Ichise, an orphan turned prize fighter, loses a leg and an arm to satisfy an enraged fight promoter. On the brink of death he is taken in by a young woman doctor and used as a guinea pig for the next evolution of Texhnolyze.

With his new limbs, Ichise is taken under the wing of Oonishi, a powerful leader of Organ, an organization with some hold on Lux. As Ichise is drawn deeper into a war for territorial control of the city, he learns of his possible future from the young girl prophet Ran, who guides him from the shadows in his darkest times. With the explosion of the warfare, Ichise must uncover the truth about Lux and fight for his survival as he realizes his destiny.