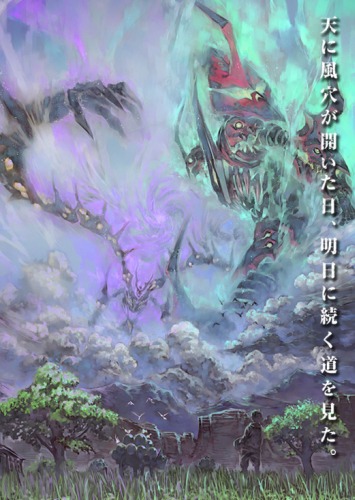 Alternative Title: Gurren Lagann The Movie: The Lights in the Sky are Stars, 天元突破グレンラガン 螺巌篇

Summary: In the distant future, people build their homes and raise domestic animals in subterranean caverns called pits. A boy named Simon happens to find a small, shiny drill that unlocks not only a more promising, but also a quite dangerous future for humankind. Together with the reckless, charismatic leader Kamina and the trigger-happy Youko, they battle against ever more powerful gigantic robots — the Gunmen — on the planet’s surface. The Spiral King’s Four Supreme Generals are merciless in their quest to wipe mankind from the surface of the planet though. One such fierce battle costs Kamina’s life. Simon is crushed by this, but saving Nia Teppelin, a discarded daughter of the Spiral King, gives Simon hope again…After destroying the Four Supreme Generals, Simon and his many human followers confront Lordgenome, the Spiral King, and defeat him. The parting words of the 1000-year-old Lordgenome, who calls himself the guardian of mankind, have an ominous ring to them though, for he warns the humans about leaving the planet for space where far greater danger awaits. Never-the-less mankind thrives in the following years, rebuilding civilization on the planet’s surface. A time of prosperity. The warning to avoid conquering space has been forgotten…