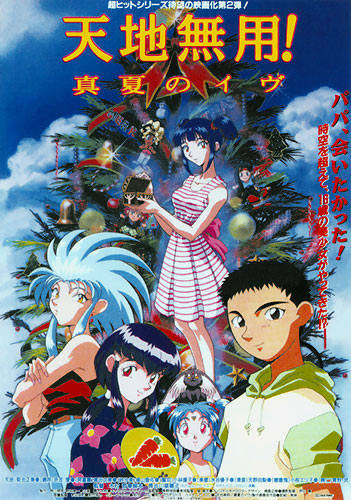 Summary: Startica is the Summer Festival on Jurai. Many years ago, Tenchi’s grandfather, Yosho, met a young girl during Startica and just as their relationship blossomed, she was attacked by the Jurai Palace who revealed that the girl was Yuzuha – the Demon of Darkness!Wounded by the attack, Yuzuha fled, but many years later her feeling of betrayal lead her to plan her revenge by taking Yosho’s only grandson; Tenchi!On a hot summer day, a fetching young girl named Mayuka appears to Tenchi, calling him Daddy! Jealousy and envy follow as Ryoko and Ayeka battle for Tenchi’s attention with an apparently new rival. Who could the mother be?!Sasami befriends Mayuka as they compare Earth’s Christmas and Jurai’s Startica celebrations and Mayuka is welcomed into the Masaki household.However, Mayuka is just a puppet of the Demon, Yuzuha, and it’s her plan to bring Tenchi to the Nightmare World completing her revenge! Will Tenchi be able to resist Mayuka’s love? Can Sasami convince Mayuka to change?It’s a battle for Mayuka as she chooses between her parents; Tenchi and Yuzuha! To be the Daughter of Light or the Daughter of Darkness!