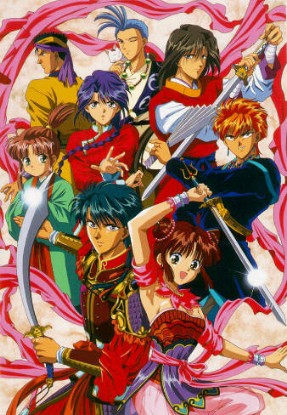 Summary: Miaka Yuuki, an average middle school student caught up in studying for exams, is sucked into an ancient Chinese novel titled “The Universe of Four Gods”. There she discovers that she is in an ancient country in what is now China, Konan, and is to be the Priestess of one of the four gods, Suzaku. As the priestess, her duty is to gather the Seven Seishi of Suzaku, who are to be her protectors. Once they are gathered, the priestess will summon the god Suzaku and bring peace between the warring lands, Konan and Kutou. But it’s harder than it seems.

Along the road, many hardships are faced, as Miaka’s best friend Yui Hongo enters the book and becomes her rival, the priestess of Seiryuu in the land of Kutou. Who summons their god first is up to the courage and skill of the priestesses and their seishi, as they meet triumphs and tragedies along the way.