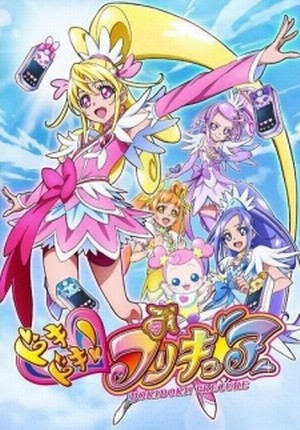 Summary: The Trump Kingdom is a magical world where everyone’s hearts live happily with the guidance of their ruler Princess Marie Ange. However one day, a evil force known as the Jikochuu attacked the Kingdom. But a warrior who served Marie Ange, known as Cure Sword, fended the Jikochuu by herself before being sent the human world with her fairy partner to find the missing princess. The Cure Sword also brought with her three other fairies who are to find three chosen girls to be her allies.

One of the fairies, Charles, finds a girl named Mana Aida who is her school’s student council president. Whilst visiting the Clover Tower’s observatory during her school’s orientation day, Mana encounters a Jikochuu who attempts to manipulate her heart but being found by Charles as he gives her the power to become Cure Heart. Joined by Cure Diamond, Cure Rosetta and Cure Sword, the Dokidoki PreCure must fight to protect everyone’s hearts from the Jikochuu.