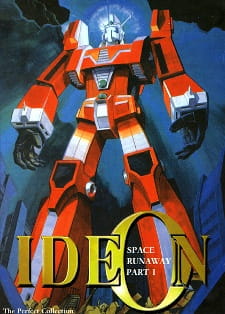 Summary: Mankind has traveled to the stars and come across various alien civilizations, now long dead. Upon discovering the archaeological remains of such a civilization on the planet Solo, humanity finally has its first encounter with a living alien species: the Buff Clan. When Karala Ajiba, the daughter of the Buff Clan’s military leader, sets foot on the surface of Solo, the Buff Clan launches a brutal assault on the colony to retrieve her.

In order to escape, Cosmo Yuki, Kasha Imhof, and Bes Jordan climb aboard three trucks, which soon transform into the giant humanoid robot Ideon. When the settlement on Solo is destroyed, the survivors board a recently discovered spaceship—the Solo Ship—and flee, endeavoring to get away from the aliens and finally find peace. The relentless Buff Clan, however, is still in hot pursuit and will not give up so easily.