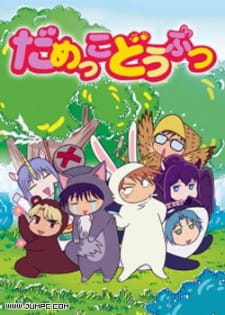 Summary: Uruno, a useless wolf, is on the road searching for a new place to call home. He soon comes upon a whole forest full of “useless animals”– that is, animals that don’t live up to their species’ usual character. After a short fight with the smoking, bad-tempered rabbit, Usahara, Uruno decides that he wants to move on… but changes his mind upon meeting Chiiko, a clumsy cheetah girl. It’s love at first sight for Uruno, and after deciding to stay for her, he continues to hope that even though he’s a good-for-nothing, he’ll win her over someday. That is, if living with the other strange residents of the forest– including the aformentioned smoking rabbit, a sake-drinking unicorn, a near-sighted eagle, an orca that cannot swim, and a shy pegasus –doesn’t get to him first.