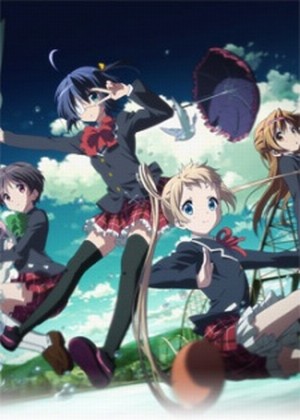 Summary: Due to various events, Yuuta and Rikka are living together. This secret co-habitation is so exciting for the two lovebirds! Or so it should be…

Is having a chuuni girlfriend too high of a hurdle for Yuuta, who never even went out with a normal girl?! Yuuta worries about how to advance his relationship with Rikka. And then everyone else, Nibutani, Kumin, and Dekomori, have powered up by advancing a grade. Furthermore, the cause of his chuunibyou outburst in middle school, the girl who calls herself Sophia Ring Saturn the 7th, Satone Shichimiya appears…

This is the long-awaited second season of the adolescent romantic comedy revolving around chuunibyou that makes you laugh and cry.