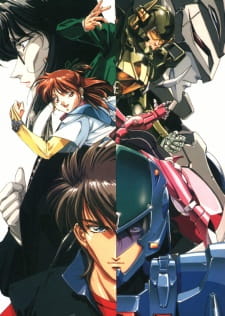 Summary: Sonic Soldier Borgman is a science fiction that comebines super sentai with non-gattai. It features a sentai-like three members team that fight an organization known as Youma. Features three characters with three basic ranger colors: Pink, Blue and Green. Featuring three main characters: Chuck, Ryo and Anise, Ryo is the leader, Chuck and Anise are teachers at a public school. Sometimes, the students help or make troubles to the Borgman somehow, some even know the Borgman secret identities. Ryo has a talking “modern” blue motorcycle that can upgrade itself. The transformation code is “Borg. Get On”. Each member has a personal cannon that matches his/her armor color that appears only to finish the monster they fight.